Strolling in a mall could be very tiring- not to mention hungry so after fetching some goodies from a bakeshop in SM, I stationed myself in the nearest stall I saw and chowed down some snacks. It was the stall of Tacos located at the third floor of the Main Mall of SM City Cebu. 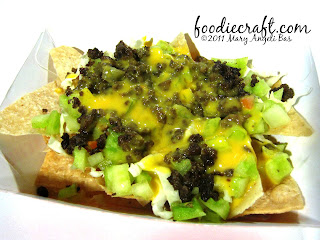 As I always do, I greeted the stall crew and flashed a smile, when she rudely responded a grumpy face and a query of what I wanted. I first thought that she didn't meant to act like it but she proved me wrong when she repeated her question in a sarcastic way. She was impolite.

There were two of them guarding the stall: one crew and one cashier. Both of them were strikingly harsh. The crew made my order abruptly and the cashier also calculated my fee in a quick manner. It was like they don't want me to stay in their place and eat. No wonder I was the only costumer they had, that time.

After the crew handed-over my order, she and her cashier sat on their seats in a lousy attitude. They began chattering about text-mates and crushes. What's their problem? Well, if they have one or two, it shouldn't be brought to their work or to me because I'm just a person who is helping them to earn a living. I'm really mad and disappointed at them moreover, their service. 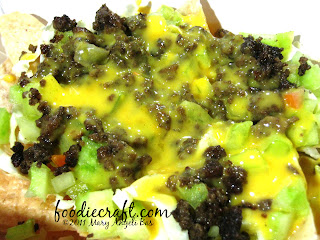 Moving on, I can say, their attitude is so opposite to the taste of what I ordered: a serving of Tostados. The snack costs Php65.00. The stall only sells Iced Tea for drinks worth Php20.00. 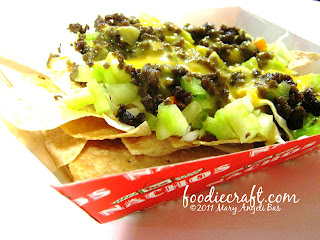 Does the picture above look delicious? If you think it is, then right you are! Tostados is a bunch of Nachos topped with cabbage, cheese, meat and some chops of green veggies. Sounds healthy right? I think so too because the vegetables are served raw and the cheese is warm-melted. 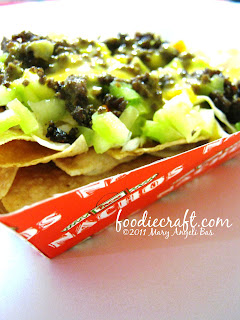 Looking at my order, at first, I thought I won't be delighted with the snack because of the vegetable dressings but then again, ''Don't judge a book by its cover'', I began eating. I turned into a Nacho fan after taking some bites of the saggy Nacho (the Nachos became saggy because of the cheese).

The chopped veggies added spiciness to the taste; complimenting the sweet and tasty meat and Nachos. I like Taco's Tostados.