Skipping a meal or two just because you're on a diet or probably too stingy for food won't do you any good. If you have a tight budget or just playing thrift, like I do sometimes, There is one place in the mall you can count on. 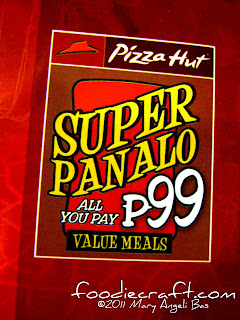 My friend brought me to Pizza Hut not too long ago and introduced to me one of the Value Meals the restaurant offers: Super Panalo All You Pay Php99.00.

Ask for the Super Panalo 99 Menu right when you get inside the place. There you will find foods you can mix and match to be part of your meal. This is the best part because you have the freedom to create your own dish combination. Choose an appetizer (soup/salad/bread), a main course (pizza/pasta/rice meal) and a beverage (ice tea/softdrink) for only Php99.00. 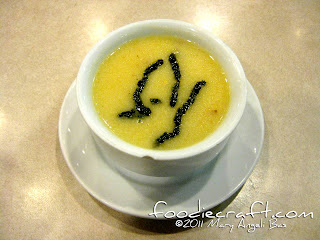 After mixing the green stuff (I wasn't able to identify the ingredient) with the yellow broth, I instantly fell in love with the dish. First of all, it smelled so glorious. Second, it was cooked perfectly; the taste was just right; the mushroom cubes (which were beneath the soup) were so soft and wonderfully cooked. 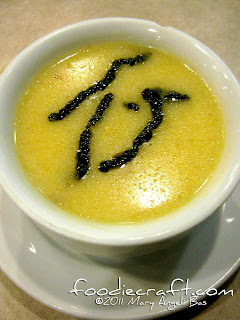 I honesly dislike Mushroom when it's not the one from Kul Kitchen (which I haven't made a review yet) but this one gave me another reason to love the vegetable.

Pizza Hut's Breaded Chicken Fillet is pretty tasty. People who haven't tried this dish would probably raise their brows as to how bad this thing would taste, considering you paid a cheap bill. Well hey! They got it wrong 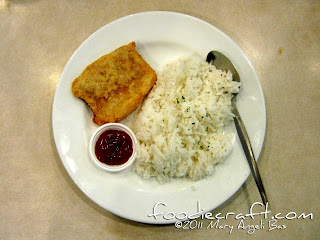 It's not that bad. It's actually pretty good. The chicken was tender and juicy. The bread crumbs that coated it were not too much. The rice was given generously and I like it there is ketchup (so it means the served chicken would taste better with it). F.Y.I. I love ketchup. 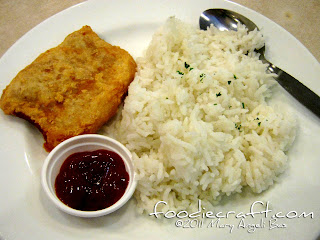 Pepsi. Seriously, you're expecting me to define the taste of this? Don't act like you haven't tried one. Kidding aside, no web in the straw, just enough ice. Peace out! 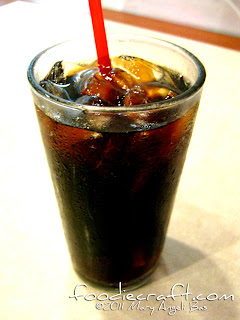 I'm really happy to share this. Pizza Hut's Super Panalo All Pay 99 is a very good choice for those who are counting their bills. All are worth the price, at some point I have to say, priced lesser than it should be!