"Stand up!". Those were the two words I heard somewhere beside me after a couple of seconds the host of the recently concluded Best Cebu Blog Awards (BCBA) 2012 called my name as the Best Cebu Food Blogger of 2012.

I stood up, walked on stage and accepted the trophy and tokens. It was like floating on air- the result of the combination of unexpectedness and unpreparedness.

I never imagined it would happen.

FLASHBACK
I was strolling in a mall in Cebu City the whole afternoon. Not yet tired, I decided to swing by the newly opened Insular Square Mall in Mandaue City to meet some old and new blogger friends present in the awards night.

I didn't plan to attend the event in the first place. Really!

PRESENT
The host turned the microphone to me, asking me for a two minute speech which I have not prepared. The only words I remembered saying was "Thank you. Thank you very much."

After the program, I had my pictures taken with friends and exchanged 'thank yous' with their 'congratulations'. It took me almost an hour to get over the fact that I received the award. It was really good. I forgot and didn't mind that almost everyone in the event wore formal attire- ladies in dresses and gentlemen in polos. I only wore sleeveless, pants and flats. I really didn't expect the whole thing to take place!

NOW
I didn't expect to bring home a trophy like this tonight. Thank you so much Best Cebu Blog Awards 2012 judges and committee. Thank you also to whoever nominated my blog to this award giving body. Big thanks also goes to my readers and to everyone who believes in my blogging skills. On top of all, THANK YOU to my paramount giver of all, Papa God.

I dedicate this award to every single being who loves food.

(This should have been my speech when I received the award but I turned out speechless on stage because I didn't expect the whole thing to happen! Hahaha!) 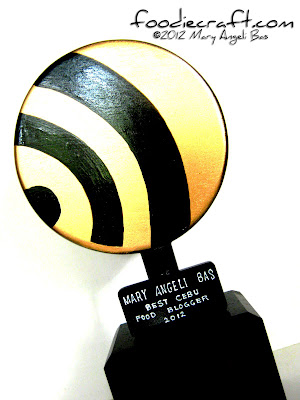 The words above are true. Thank you readers for the support! This blog wouldn't be as good as it is now if you weren't there to remind me that this is not just for me but also for you guys.

May this award be an inspiration for everyone to express their real thoughts about anything they eat or drink.

Email ThisBlogThis!Share to TwitterShare to FacebookShare to Pinterest
Labels: personal