About a week ago, I read an email sharing information about a food exposition. It sounded fascinating and so for the very first time in my entire life, today, I attended one.

World Food Expo (WOFEX) Visayas 2013 HoReCa (Hotel, Restaurant and Catering) is a food and beverage convention. It opened today and is going to culminate on April 6, 2013 (you can still check it out at 10am to 7pm, hurray!) at the Cebu International Convention Center.


AT THE CONVENTION
Food welcomed me as I entered the entrance of the hall. First at sight were breads baked at the venue by masterbakers. Heads turned to the trays where Croissants, Raisin Rolls and Bagets were placed. They all beget such a luring aroma. 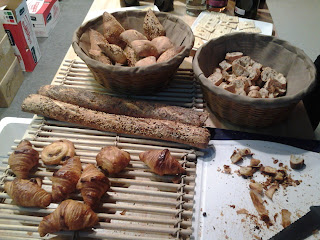 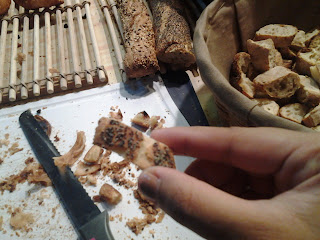 Fellow visitors beside me heard the flaking sound of the Croissant as I held it between your fingers. The taste was so divine, it seemed like there was magic happening in my mouth.

The Raisin Roll looked like a simple roll of dough but don't be deceived by its physical appearance. Its taste is better than how you see it. It has a kick of cheezy melt-in-your-mouth fill that dramatically makes your eyes close of satisfaction. Dislikers of raisins will turn into raisin lovers once they taste such delicious bread.

Baget played a somewhat bland yet tasty flavor on my tongue. The black sesame seeds made it good-looking at the same time good-tasting! 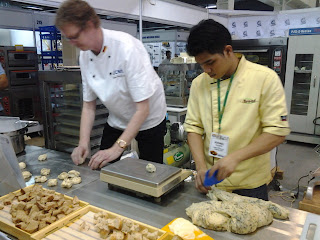 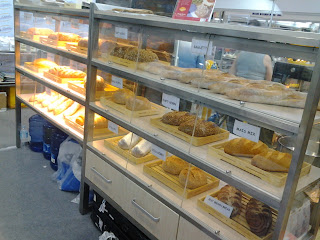 Enough with the breads.

There was quite a number of coffee booths in the room but I wasn't able to taste at least one cup because they were not free and I was being thrift (don't blame on me in this, I'm saving for something). Same matter went to the cakes. 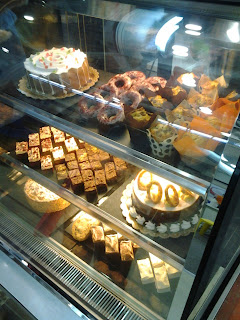 Now onto the meat.

There were only a few displays of meat. Most of them were imported from Europe. They all looked fresh.

CDO had an interesting way of appealing visitors. They blind-folded volunteers and made them taste all their products. The catch of course was to guess the kind of meat and state how it differs from other brands.

The crew of the booth prepared cups of tacos topped with CDO meats as salsa. 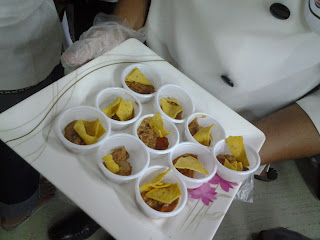 There was nothing so special about the food at the dessert area but I still like it. Chocolate (the magic word), was available in ways I know you all will surely enjoy. There were chocolate spreads, chocolate milk, chocolate syrup, chocolate tablets and many others. They were all delicious. 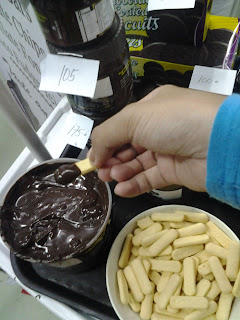 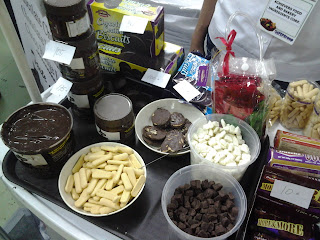 The fruit salads were concocted by Dole. Should I say something more about it? If you are a proud Filipino you would know for sure that the salad I tasted was one hell of a refreshment. Pineapples from Cagayan de Oro just won't fail you. 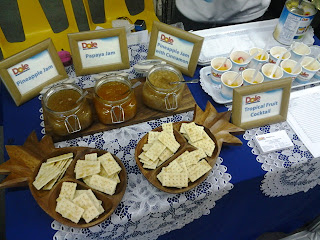 The Casa de Tortilla section wasn't very prepared for my appetite. The crew who guarded the booth wouldn't let me have my fourth round of free taste (I'm such a pig). This booth sold chips, tacos and tortillias. The tacos came in varied colors. Asked if the flavors differ together with the color, the crew said the colors were made from colored grains. The flavors are all the same. He explained more that the colors were incorporated to the tacos to accentuate its look because they were made for parties. 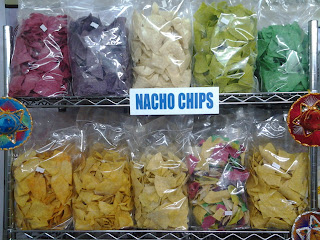 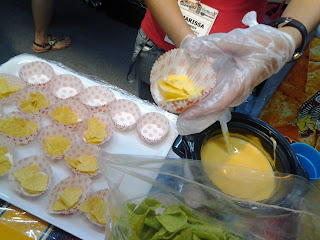 The milk and butter booths were easy to count. One of them gave me three sachets of instant chocolate drink for my sampling. They had cakes and breads baked with the use of their products. I barely noticed the difference of the local bread and the one that they made me taste. I did not taste their slice of cake though, I only tried their bread which is a not-so credible generalization.

Here are other foods I enjoyed. 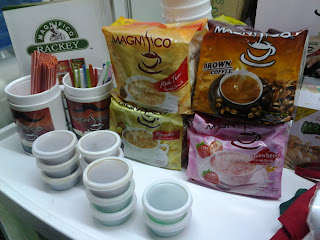 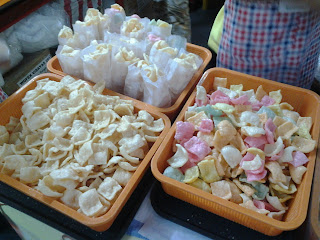 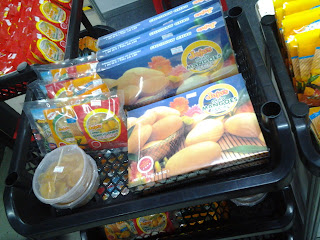 How I love wines! 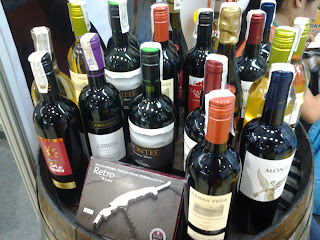 Visitors will learn the basics and complexities of the food and beverage industry at WOFEX. 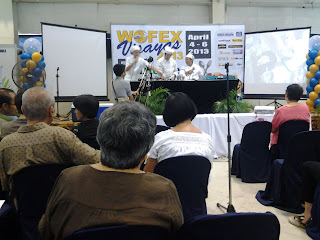 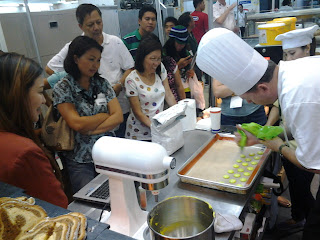 There was a seminar today and there will be a continuation tomorrow and the next day. A fee is to be paid for those who want to attend the seminar. I wasn't so interested with the topics so I decided to pass it.

Booths at the right side of the entrance displayed poultry & farming necessities and kitchenware of all types. There was a booth catering to visitors who were into farming. There was also a package booth catering to business people who were looking for packaging service. There were also a booths for gasses, paint, containers, cleaners and other things needed for food and beverage operations. 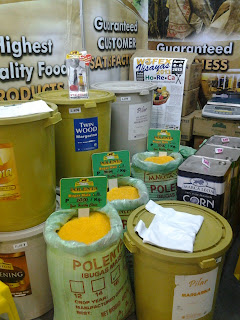 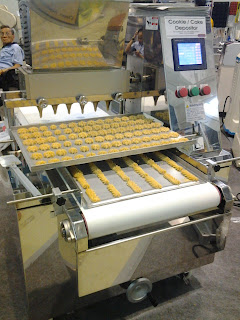 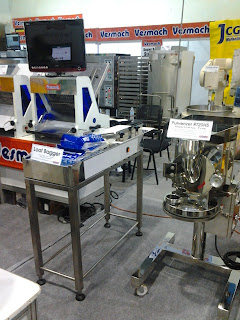 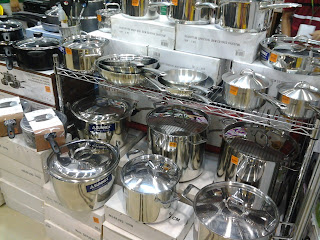 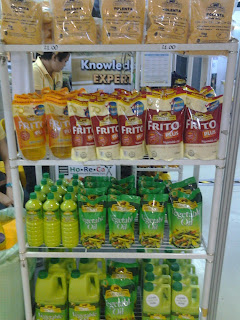 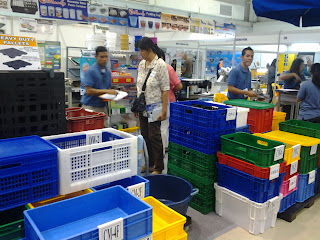 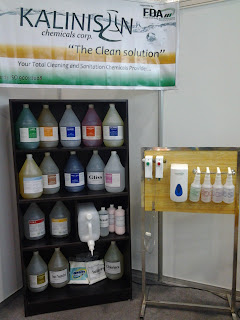 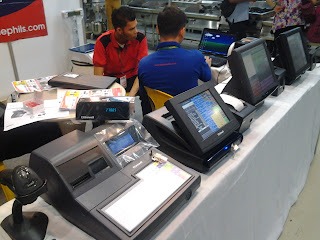 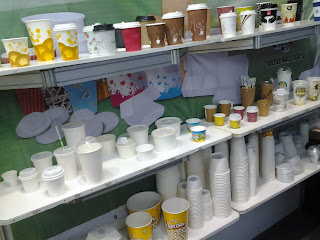 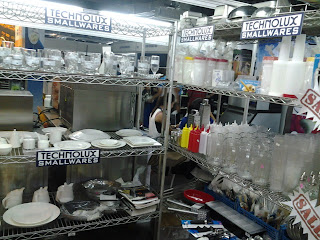 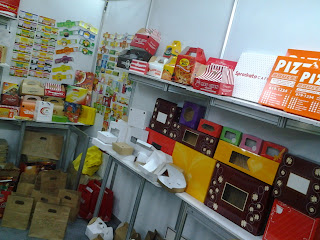 Before I'll end this post, I'd like to inform you, my dear readers that this is the first time that I failed to stamp labels on my pictures and my pictures are not so nice. The reason for these is that my sister broke my camera and personal computer the other day. I only used my tablet for picture taking and right now, as I am live blogging, I am at my neighbor's house. Haha. Funny but true.

WOFEX Visayas 2013 - Ho Re Ca is best for those who are enthusiastic about the food and beverage industry. There so many interesting finds to know and bring home from the event. Most people you'll see there are hoteliers, restaurers, caterers, entrepreneurs and food specialists.