Eating, for a food blogger like me, has turned out to be such a perilous act. To pass a week without missing to eat something either new, instant, or international has become a necessity. 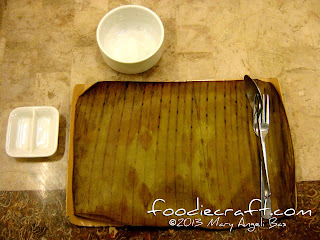 I did not understand why I perceive it as a saddening matter. Last week, I realized why: I miss Filipino food. This is absolutely the reason why I was so thrilled to have dinner with friends at Golden Cowrie the other night.

Golden Cowrie is one of the most-loved restaurants in Cebu. Its deeply rooted in regional fare matched with prompt attendance and convenient restaurant venue makes it a one-of-a-kind place for tourists who want to get to know the province through stomach.


I already blogged about this restaurant last year so I won't talk about the place, its service nor the dishes that has been in the menu for over a year.

It was a night of new tastes at the Golden Cowrie. First served was the Baked Scallops. I know I just said I won't talk about aged food in the menu but this won't take long. I'm just going to do a comparison.

My childhood favorite Baked Scallops at Golden Cowrie looks like this. 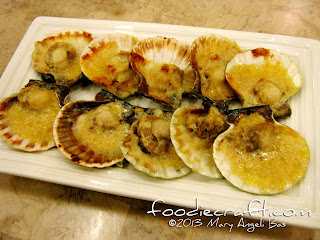 The all new Fried Scallops is simply the scallop scraped out of its shell, coated with flour and deep fried. It's served with Rava Sauce.

This dish wasn't bad for tasting. I'm not being biased here but he Baked Scallops is a good choice over this new addition to the Golden Cowrie menu. Blame the cheese. 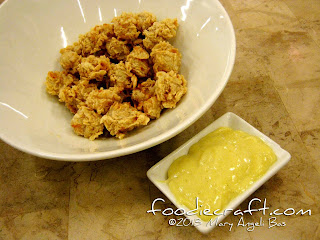 The Taba ng Talangka or crab fat tasted brine, not too strong but smooth. It is crazy good! I wouldn't be surprised to see anyone dining at Golden Cowrie with only Taba ng Talangka and rice on their table. 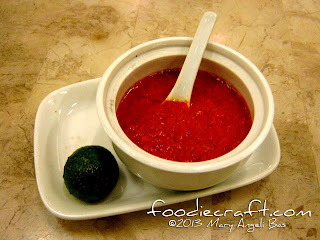 The Adobong Talong is eggplant cooked the way Adobo is cooked.

It was good. It was sweet and sticky. I didn't appreciate its taste much because as I chewed it, my mind was occupied with the "gooey-ness / slimy-ness" of the food which made me somehow grossed out. 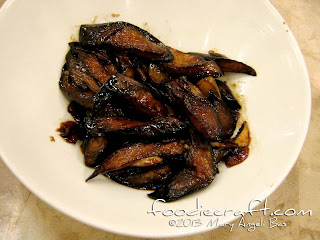 The Ngohiong is a bigger form of spring roll with a few different ingredients inside and crunchier.

It was good, traditionally good. It needed no sauce to enhance its taste-it was good on it's own. Served alongside this dish was patis and ngiong sauce. 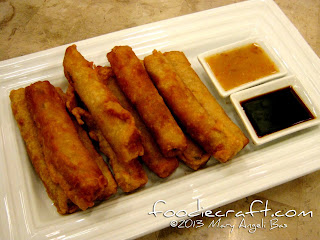 The Sinigang Baby Prawns is baby prawns cooked and stirred in sour soup.

The play of flavors that made up the broth and tenderness of the prawns made my night! 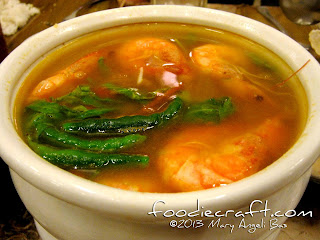 The Fried Baby Squid Con Tinta is a bunch of small squids coated with flour and fried.

The squid was delicious, thanks to its ink. I am amazed at how the ink retained its original taste after it was fried. The texture of the dish made it crunchy and chewy. 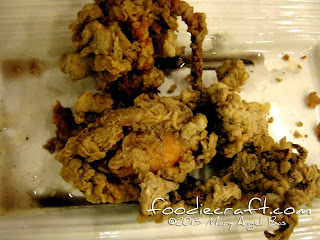 The Crispy Pata was such a filling dish. It was easy to cut, yummy as I chewed and simply delicious in the stomach. 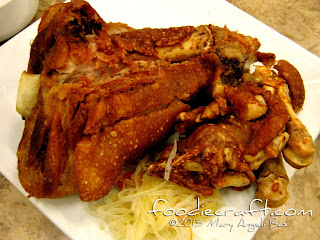 The Fried Liempo is pork belly marinated in a mixture of crushed garlic, vinegar, salt and pepper.


It was good but it would have been better if in the process of frying the Liempo, there were ways applied to keep the juiciness of the it. I just think that in frying the Liempo, the flavors float out to the oil in the frying pan. Also, in the end, when the Liempo is placed out of the boiling oil, it is greatly to get stiff, making it hard to cut and chew. 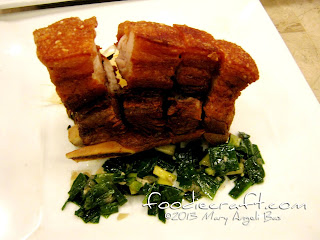 The Grilled Pork Belly has exactly the same part of the pork and ingredients of the Fried Liempo only that it is grilled. 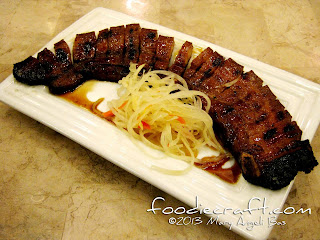